It is that time of year again where those mysterious little tents seem to form in our trees overnight.  Have you ever wondered what they are and what they are doing in there?

Tent Caterpillars (Malacosoma) are a mid sized genus in the Moth (Lasiocampidae) family.  There are species found in both North America and Eurasia.  There are thought to be 26 different species (some having many subspecies), 6 of which occur in North America.  They are considered by many to be pest as they have a nasty habit of defoliating trees.  Tent caterpillars are considered to be one of the most social of all caterpillars often developing together within the same tent system. They are not only social but most often very colorful and are easily recognized by their silk tents built within the branches of host trees.  Tent mates are often decided based on the foraging ability of each caterpillar.  The Eastern Tent Caterpillar is the most common of the genus.  Tent caterpillars hatch from their eggs in the early spring at the time the leaves of their host trees are just unfolding. 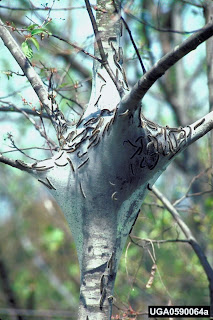 
Some species of Tent Caterpillar build one large tent that houses them throughout the larval stages, while others build a series of smaller tents that are abandoned sequentially throughout the stages.  Tent caterpillars establish their tents soon after they eclose. They always make their tents within the nodes and branches of trees in a location that catches the rays of the morning sun.  Positioning of each tent is very critical as the caterpillar must bask in the sun during the early morning hours to elevate their body temperatures.  If their body temperatures dip below 59 degrees farenheit their bodies are not able to perform the simply process of digestion.  Each tent is made up of layers of silk that are separated by gaps, each individual compartment temperature can vary noticeably.  The caterpillar can move between compartments to alter it's body temperature as needed. 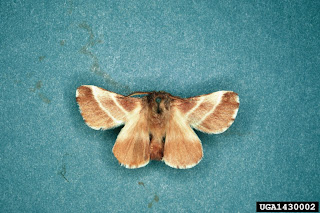 Tent Caterpillars are foragers searching out food and feeding to the point of repletion, once it has reached that level it returns to it's tent.  Along the way each caterpillar leaves a trail for other tent mates to follow to a good food source.  The chemical trail left behind in often compared to that of the ant or termite.  Their development is greatly in tune with that of their host trees, once the leaves of the host tree reach maturity they are no longer to feed from them.  They feed multiple times a day based on the needs of that level of the larval development.  They often leave the tent in mass, and move together to feeding sites. 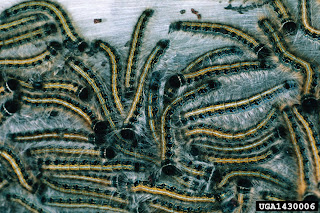 Caterpillars grow at a very rapid pace and complete their entire larval process in a short 6-8 week period.  Once they leave their tents they find a suitable location (often a protected area on the ground or a structure) to spin their cocoons.  About two weeks after spinning their cocoons they emerge as adults moths.  Shortly after this point the female moth excretes a pheromone attracting a male to her for the purpose of mating.  After mating the eggs are then placed around branches and covered with spumaline, this material prevents the eggs from drying and protects them from parasites.  Once the eggs are laid the female dies.  The cycle of a female moths adult life may only last a short 24 hours while a male can live for a week or more.  Within three weeks of egg laying, small larvae can be identified within each egg mass, these larvae will remain encased within their shells until the following Spring.

Meet more trees and pests on our website www.ArundelTreeService.com  or follow our blog  www.MeetATree.com
Posted by Arundel Tree Service at 11:40 AM