What causes the row of holes in my trees? Meet the Yellow Bellied Sapsucker woodpecker 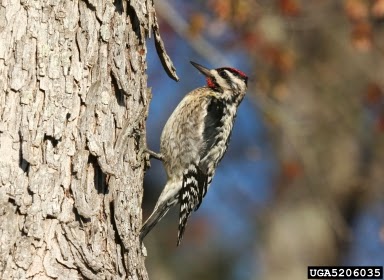 Yellow-bellied Sapsucker, sounds almost like and insult if you have never heard of the migratory North Eastern Woodpecker with that very name.  The yellow bellied Sapsucker is the only woodpecker in the Eastern North America that is completely migratory. Few may remain locally during most winter in the southern most portions of the breeding range, most however head further South as far as Panama.  For the most part the females travel further south when migrating then the males.  With length between 7-8 inches and a wing span of 13 to 15 inches they are an average size woodpecker.  They are larger then a Downy Woodpecker, but smaller then a Hairy Woodpecker.

These birds are known to favor many different species of trees in this area, leaving a tell tale evenly bored rows of holes in their wake.  They make two types of holes while they work.  The First is a rounded hole extending deep into the tree that they probe for sap and trapped insects. The Second is a more shallow and rectangular hole that must be maintained to keep sap flowing.  When new holes are made they are usually kept in the same row or pattern of rows as before.  The wells of sap created by the Sapsucker are also frequented by hummingbirds who take advantage of the free flowing sap.  The holes are most commonly found on Atlas Cedar, Hemlock, Red Maple, Yellow, Paper and Gray Birches.  It seems Birches and Maples are a favorite as they tend to be the most notably marked.  Extensive and repetitive pecking may cause cambium and bark injury and brank/trunk swelling.  Resulting Girdling may kill portions of the trees above the boring injury.  Removing nesting areas for the Sapsuckers, such as decaying Aspen and Birch trees may help limit their activity as they tend to nest near the areas they feed. 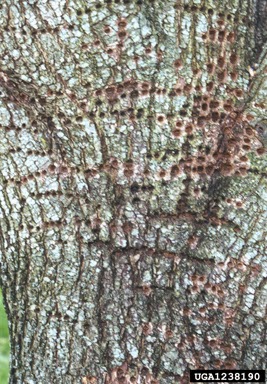